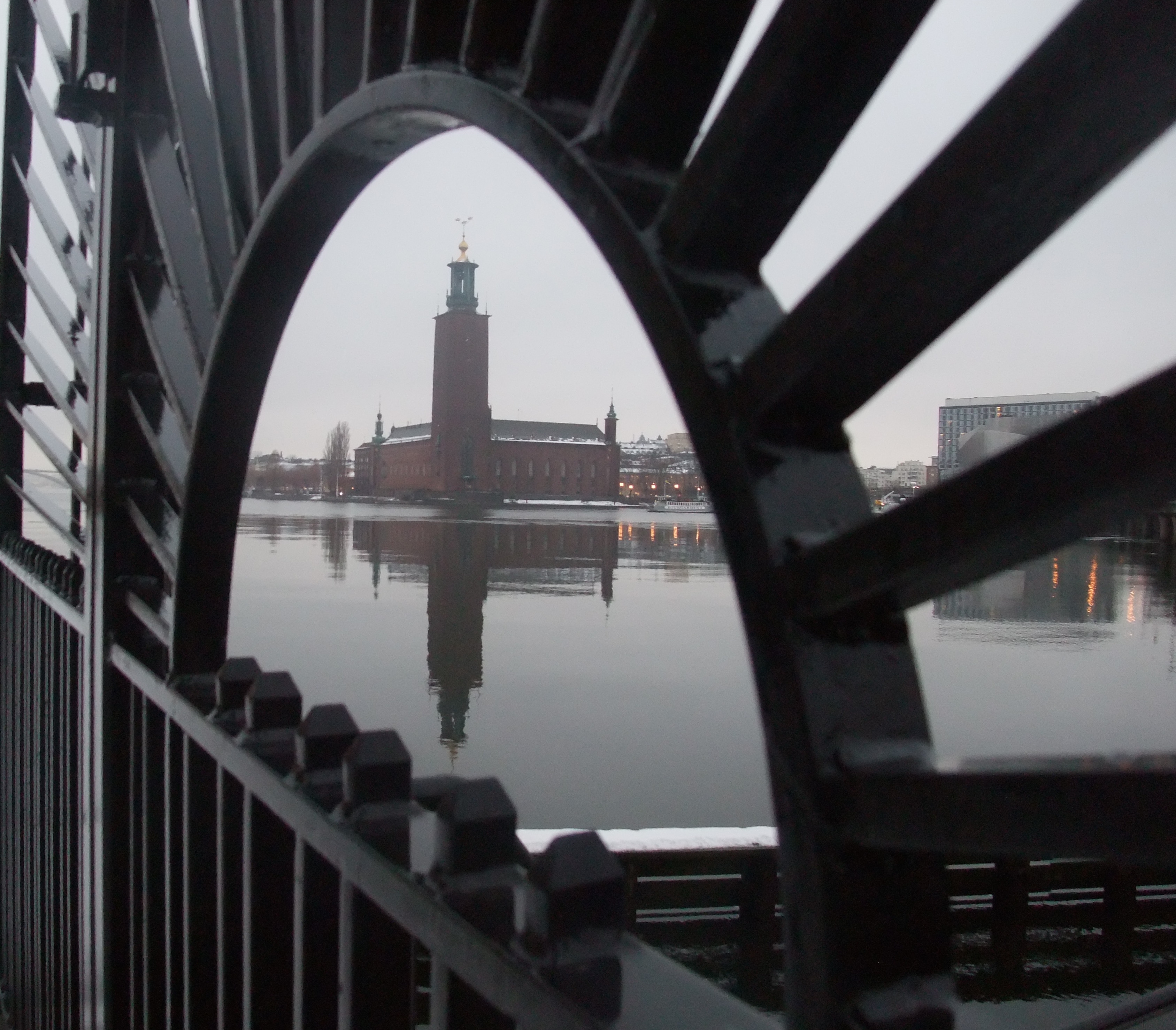 Stockholm, capital of Sweden, is often called “Queen of Lake Malaren” and considered to be one of the most beautiful cities in Europe. However, the once lively street life is being intruded upon by the growing amount of cars. To improve the situation Stockholm is turning the traffic pyramid upside down by prioritising pedestrians, cyclists and public transport. Join Tellus Think Tank and meet the Stockholm City Commissioner of Traffic, Daniel Helldén! Text: Domi, Tellus Think Tank, 2016-02-25 Photo: AnnVixen

I grew up in Stockholm and love this city for several reasons! It’s not only a beautiful city, close to nature, but it’s the place where I went swimming during the summer, my parents taught me to bicycle and I spent most of my work life. Now I am watching my own children grow up here.

The city has changed a lot since my friends and I played in the calm streets of our neighborhood, with no cars present. We played tag, jumped with skipping-ropes, played land hockey and climbed trees!

The children of today have little room left to play as the streets are full to the brim with parked cars and aren’t safe with bypassing traffic. Consequently, children play more indoors and often with their computers, a situation shared by children in urban societies all over the globe.

A while back Tellus Think Tank met David Beeton, founder of Urban Foresight. The British company helps cities plan for a more sustainable future traffic situation. After this meeting we wondered about what was being done to improve traffic in our own hometown, Stockholm.

This week Tellus Think Tank meets with Daniel Helldén, the current City Commissioner of Traffic in Stockholm and elected as a representative of the Green party of Sweden.

Next week: We meet Stockholm City Fleet Manager, Johan Seuffert, would you like us to notify you when the article is available, click here.

Stockholm was founded on the Island of Gamla Stan over 700 years ago. The island is one of many in a cluster of islands in the eastern part of lake Malaren. The region has since grown and the city is now spread over several islands and onto the mainlands north and south of the lake.

The region has a population of 1.8 million people. Daniel Helldén represents the most central part of the city with 900 000 inhabitants. Stockholm is growing rapidly and estimates show that the central parts will be expanded with another 140 000 inhabitants during the next eight years.

The traffic situation of Stockholm is challenging, a situation shared with many other cities. Cars often

dominate the cityscape and the character of the city. At times cars and buses stand still in the daily traffic queues. Peak hour traffic is expanding over a longer period as more people drive their car to work and try to avoid the queues by leaving earlier or later. On Friday afternoons weekend traffic starts as early as 13.00 PM.

Daniel Helldén, thank you for meeting Tellus Think Tank and our readers! You have been Stockholms City Commissioner of Traffic since the elections in the autumn of 2014. What were your initial ambitions for improving sustainability of the traffic situation in Stockholm?

My ambition was and still is to improve the sustainability of Stockholm which demands many changes in the infrastructure of the city, so that traffic by foot, bicycle or public transport is prioritized instead of car traffic. There is a common understanding about this that is shared by all parties in Stockholm. I would really like to make a difference in this area, which will include decreasing traffic by car and contributing to the Swedish national climate targets.

What are the biggest challenges in the Stockholm traffic situation, from a sustainability perspective?

The amount of cars is a large problem, from two main perspectives:

The amount of cars in Stockholm today makes the city unavailable, not just for drivers but also for bicyclists and people on buses. The space that cars claim when driving and parking could be used for bicycle paths, bus lanes to enhance the speed of commuter traffic and for cleaner pedestrian paths.

We would like to improve the living space of the city so that traffic flows better, people can spend time outside and walk or take their bicycle to work.

What progress has been made during your first year as City Commissioner of traffic?

Daniel Helldén looks a bit surprised and I realise that my question comes early in the change process,

what changes can be achieved in just a year?  Daniel has some early improvements to share, either implemented or in the planning stage. Daniel talks about a general understanding between all political parties in Stockholm, however other people say that “the Greens” are very driving in matters of improving the sustainability of the city.

New boat line. Today, says Daniel proudly, is the opening of our new commuter boat line that runs between two of Stockholm’s central islands. Now pedestrians and bicyclists need not walk miles around the waters of the central city but can instead use the city’s new boat line! The boat line is the result of cooperation between the County Council and Stockholm City.

Euros on expanding the bicycle path infrastructure and making it safer. Several roads and parking places are being removed from the city because of bicycle path expansions – Daniel mentions streets such as Norrmälarstrand, Skanstullsbron and other areas under planning.

Increasing the speed of public buses. Because of the amount of traffic and cars parked in the streets the average speed of public buses is currently only 11 km/h! Several steps have been made to increase their speed such as more bus lanes and changing intersection traffic signs and directions so that cars don’t slow down the bus traffic. Some roads have been closed to private cars all together.

Increasing  pedestrian areas. During the summer of 2015 experiments were made to try and increase the street life in the city and two streets were closed off to traffic, Swedenborgsgatan and Skånegatan. The purpose was to increase livability and street life of the areas involved and create more sustainable spaces for city dwellers.

We find the developments that Daniel has spoken of so far are inspiring and interesting and see how they could help lift the quality of living in Stockholm.

What will Stockholm do to improve sustainability of the traffic situation further?

Continued investigations. Several ongoing investigation will lead to a more sustainable traffic situation for the inhabitants in the expanding city and will help Stockholm move towards improved public transport, pedestrian- and bicycle traffic.

Parking strategy. Another thing that Daniel believes will improve sustainability is the city parking

strategy being developed. He hopes the formal decisions will be made during the summer of 2016. The strategy will most probably suggest implementing parking fees in the more central suburbs of Stockholm.

Why are parking fees needed in the suburbs?

-Implementing parking fees will, for one thing, help increase the flow of traffic in the city but there are several positive effects expected, he expands his reasoning:

The current urbanisation process is making Stockholm grow rapidly and the building of new dwellings such as apartment houses needs to continue to house the expanding population. By decreasing the amount of parking in conjunction with new estates costs of building can be lowered and the space can be used for bicycle garages, car pools or even more residential homes.

However, when new estates are built without parking lots the risk is that cars are parked on the streets instead. This leads to a slower traffic pace and less space for pedestrians, bicyclists and public transport. Introducing a fee on street parking promotes use of public transport and bicycles.

It seems like there are many good initiatives going on to improve the sustainability of the Stockholm traffic. Daniel, which three initiatives would you prioritise during this term, 2014- 2018?

Tellus Think Tank thanks Daniel Helldén for an inspiring meeting. We hope that Stockholm is able to continue on the path towards more sustainable traffic situation that makes a more lively cityscape possible. The Stockholm approach to the traffic pyramid might change the city in ways we would never have thought off!

Next week: We meet a civil servant of Stockholm, in charge of the city car fleet! What is done to increase the sustainability of the car fleet without having to decrease citizen service – would you like us to notify you when the article is available, click here.