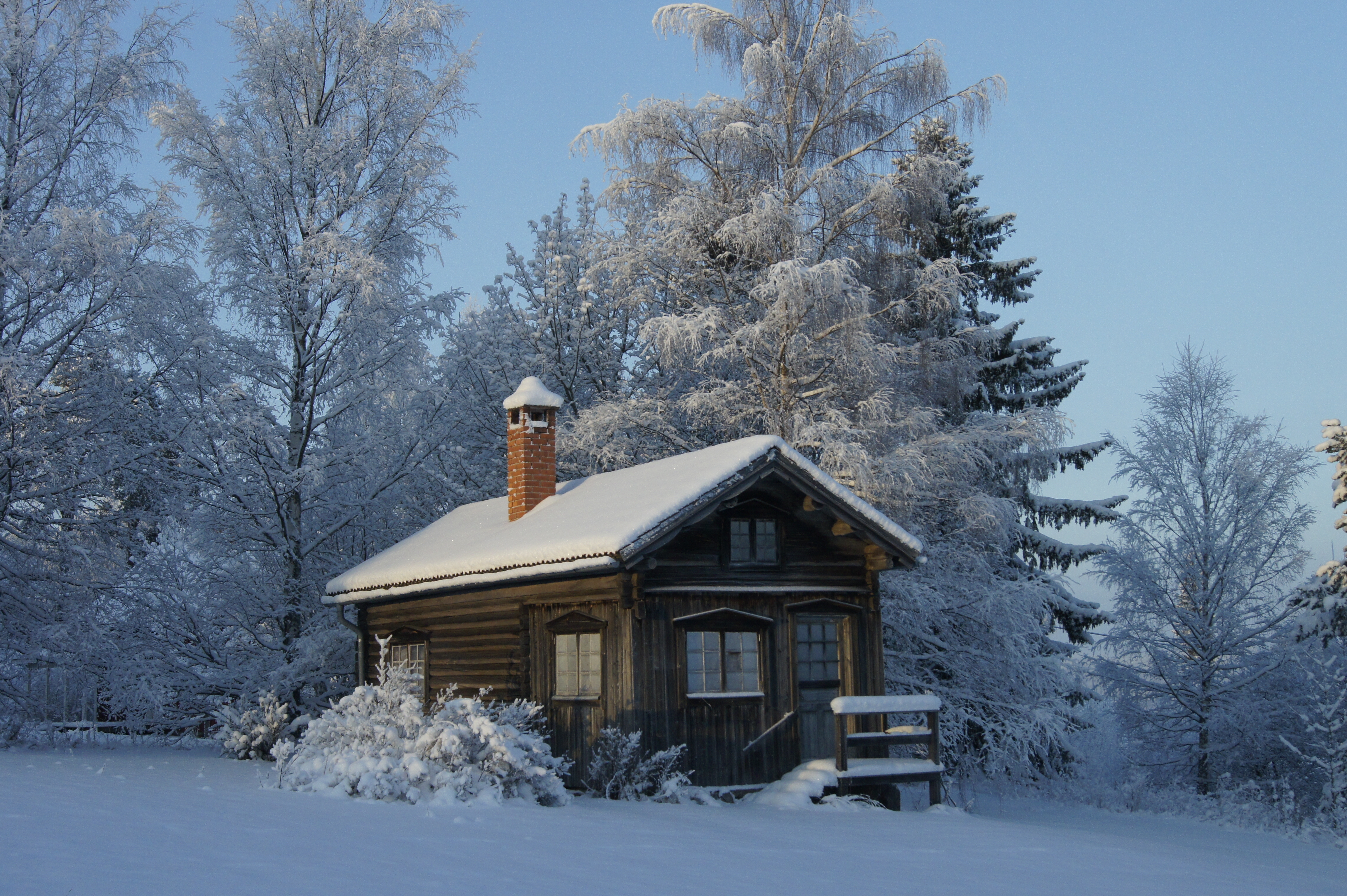 Do you live a fulfilling life in the midst of the rush, the fumes of the city with high costs of living and

the need to commute to work or school? Do you ever wonder if life could be lived differently? From the 70’ies until today at least 200 people have had the same thoughts as you and moved to the small village of Skattungbyn in the rural district of Dalarna in Sweden.
Text: Domi, Tellus Think Tank. Photo: Agata Mazgaj, AnnVixen, Daniel Zetterström

My friend Agata and I often have long discussions on everything from sustainable living to Swedish media and Polish politics.

One day she told me about a Swedish blog she found on the theme of living in small quarters and in this way making as small a footprint on our planet as possible. Would this be a life for us? All of a sudden we are on a road trip to Skattungbyn in the Swedish district of Dalarna, tag along!

Tiny homes on wheels in Skattungbyn

The roads are empty when we drive into Skattungbyn this sunny, frostbiten Saturday morning in January. We get to experience the village in sunlight as it clutches on to the hillside with a fantastic view over the nature of Orsa Finnmark. This at once feels like a harmonious place, a feeling that endures through our full visit!

In the village of Skattungbyn one can find a rather unique way of living, Tiny Homes on wheels. We have the privilege of meeting Markus Skoog, that some here would say personifies, thanks to his blog , “AttLevaDetLevandeLivet”, the Tiny Home dwellers.

The people that build their own Tiny Homes on wheels later seek permission from a landowner in the village and roll their home onto the designated part of the land. The rental agreements differ from situation to situation.

Also read the next article about Skattungbyn and the community there, it will be available next Thursday! Would you like to be notified, click here.

Why live in a Tiny Home on wheels?

Markus tells us that there are several reasons behind the Tiny Home residents in Skattungbyn:

What I find the most interesting is the insight that it is possible to live so much cheaper than we currently do in the city, and it isn’t hard to come by this simpler life. Depending on how the perspective living simpler might even bring a higher quality of life? Ofcourse, there are pro’s and con’s connected to every way of living!

The Swedish Tiny Homes on wheels differ a lot from the American Tiny Homes. Markus tells us that Tiny Homes in the US want to hold their distance from the trailer people and that they pretty much squeeze every comfort into their Tiny Homes, at almost any expense.

-The kitchen areas in the US Tiny Homes cost a fortune even though the size of the houses are very small. Also, every Tiny Home in the US has a toilet and a shower. They look like normal houses in a mini format.

The Swedish Tiny Homes on wheels are all about living simple.

Markus built his first Tiny Home on wheels and quickly sold it. During the

coming winter season he borrowed his friend Lorraia’s Tiny Home, which he smilingly describes as a “glorified tent” as the house was very badly insulated. The heating system consisted of a wood stove and when Markus came home late at night it would be so cold that he would have to be quick to light the wood stove fire, jump into his sleeping bag and fall asleep.

After a while he found that he could heat water on the wood stove and pour it into plastic bottles that he would snuggle into his sleeping bag to keep the heat during the night. After that particularly cold winter Markus felt a strong urge to build his own, well insulated home.

The day Agata and I visit Skattungbyn we read -17°c / 1,4°f and we understand how important insulation is in this climate!

Markus’ new house, designed with a “broken” gable roof like the cutest Astrid Lindgren cabin, is very well insulated! The Tiny Home on wheels was built in 2013 and it took Markus about two months to finish it to the point where he could actually move in. He didn’t have everything in place from the beginning, and finished bits and pieces when he could afford it. In the beginning, until he was able to afford indoor paneling, he dressed the walls with colourful cloths!

-It was lovely to finally get the panel in place, smiles Markus!

The cost for the Tiny Home on wheels initially added up to 50 000 kronor / 5 000 Euro. After having chosen to improve the quality of the house with a tin roof and some other comforts Markus estimates that he has paid about 80 000 kronor / 8000 Euro for his Tiny House on wheels.

-I chose not to equip the kitchen part with a drain but there is a kitchen bench and I have a large pitcher of water and a large bowl for kitchen use! says Markus!

Agata and I are invited into Markus “one roomed apartment”. It feels airy, warm and minimalistically decorated. On the right short side of the room we find a kitchen bench, in the middle of the room the wooden stove is crackling. By one of the windows we find a second heating source, an electrical heater, that works since Markus has electricity installed. At the other end of the room Markus has built a wooden sofa covered with mattresses. From the sofa we can just make out an almost hidden ladder leading up to a so called mezzanine loft, half storey loft. That is where Markus has installed his sleeping quarters, just under the roof.

The house is properly insulated with old newspapers, that can be bought in large sacks at any local home depot. The

papers are put into a large mill and blown into the space between the columns of the walls of the house. The newspaper insulation works really well and is  a much more sustainable alternative compared to Rockwool or such, says Markus that is a professional carpenter!

The Tiny Home, just like the other Tiny Homes in Skattungbyn, is built on boat trailer wagon structures or similar. Markus chose to build his Tiny Home on a two wheel wagon structure. Most Tiny Homes here are built without drains and toilets but have possibilities for cooking on the wooden stove.

Owners of the Tiny Homes on wheels can sign for a comprehensive household insurance allowing the Tiny Home to be moved twice during a year.

Markus has films on youtube, with soon above 60 000 views, on how to build his Tiny Home.

It is icy cold in Dalarna today and Agata and I have dressed accordingly but are still freezing when we move around the grounds to look at more Tiny Homes on wheels.

Costs of the Swedish Tiny Homes on wheels differ depending on the type of material and the origins of the materials.  Markus Tiny Home on wheels cost 80 000 kronor / 8 000 Euro. Flurlundargård, the farm that Markus house stands on, has another three tenants in Tiny Homes on wheels. The other houses have cost far less ranging from 4 000 kronor / 400 Euros to 50 000 kronor / 5 000 Euros. The Tiny Home with the lowest cost was one where all the wood was donated from a de-construction site, total cost of zero kronor / zero Euros.

Interested in running costs of life in a Tiny Home on wheels, read more in next week’s article, get a notification when it is available.

If Markus would have built his house today, what would he have done differently?

-I have a long list of improvements that should have been thought of! he laughs and tells us he would have built higher

walls and a normal gable roof. He would also have built the house much smaller than 17 m² / 182 f² as the current house is a bit big for his personal needs and needs a tractor to move it! The current design places the wood stove in the middle of the room to match the aesthetically placed chimney, set in the middle of the roof. If he could re-do this he would have placed both the wood stove and chimney along one of the walls.

Markus has access to both electricity, a kitchen, a shower and fresh water in a tap system as he is camped on the land of and affiliated to the FrejaLinas collective, that locally goes under the name Flurlundar farm. He estimates that about half of the Tiny Home dwellers in Skattungbyn do not have direct access to either electricity or water.

-What, is it possible to live this way, I wonder curiously? How?

Without fresh water toilets
Markus says that most of the people that want to live in alternative ways in Skattungbyn have access to large plots of land and in some cases also to water toilets but they choose to build and use an outhouse.

An outhouse, composted in a correct manner, is transformed by bacteria to very good farming soil in just two years. The soil can be used as fertilizers to farmlands or tree- and bush cultivations.

Without fresh water
The Tiny Home dwellers of Skattungbyn have several possibilities to shower and even take a sauna.  There is the “village sauna” at the cost of 10 kronor / 1 Euro per visit. The village also has a small sports auditorium that also provides a shower, for free. Markus tells me that several people who live

without direct access to water heat water on their wood stoves and wash with soap and towel at home. Water can be fetched from the snowy winter slopes or from many of the lakes and streams that run through the village during the summer.

Without electricity
Almost everyone in Skattungbyn has a smart phone and if they don’t have access to electricity in their home phones are charged at work or with battery chargers.

Electric lighting is replaced by gas lamps, battery lamps or oil lamps. The Tiny Homes are  often solely heated by wood stoves. Cooking is also mainly performed on the specially designed wood stoves. Many Tiny Home dwellers are vegetarian or even vegan. Food that is cooked could be oatmeal porridge, lentils, soups or boiled

Markus is more of a flexitarian, as he eats meat if someone invites him to it. The Flurundar farm collective however cook all their meals together and only cook vegetarian food.

Do you find that life in a Tiny Home on wheels differs quite a bit from other Western lives? Read more about the community of Skattungbyn next week. Do you want to be notified when the article is available, click here!