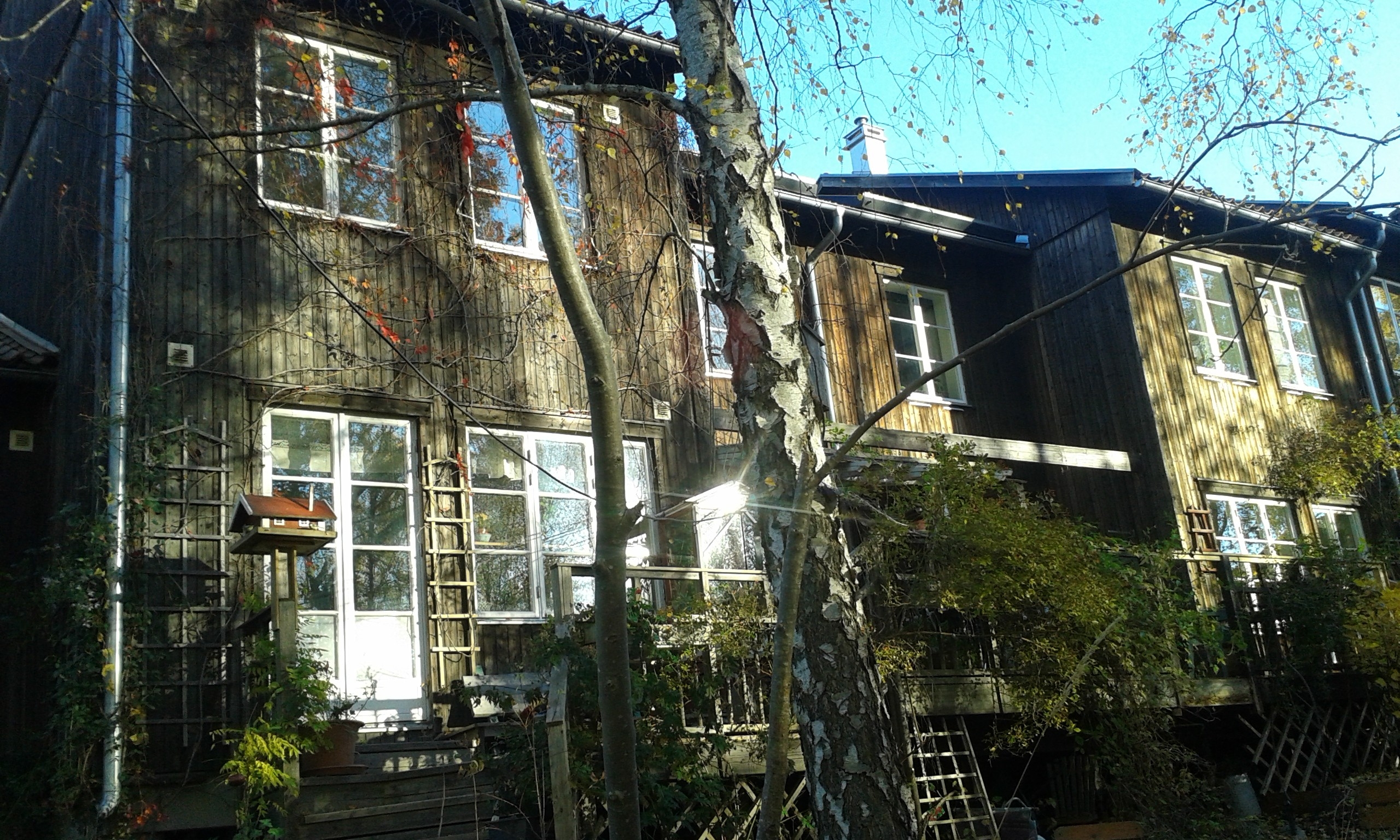 Tellus Think Tank meets Mathias Edstedt, chairman of the housing society of Understenshöjden in the Stockholm suburb of Björkhagen. Understenshöjden is one of Sweden’s first eco villages!
Domi, TellusThinkTank

It was a snowy winter day in 2012 when Mathias Edstedt and his family moved into the eco village in Björkhagen. They had decided to move out of Stockholm city center and the densely populated area of Södermalm. The family hoped to find the perfect compromise between the joys of city and nature!

The perfect compromise between city and nature is exactly what hits me when I step into the village. It is obvious that the green patches in the area, consisting of uncultivated woods, are generously laid out between the houses.

The estheticly iron-vitriol painted houses with large windows, stand in harmony with their surroundings. I feel at peace when walking through the area.

Below the southern slope of the eco village one can also find Kärrtorps sports field and entrances to Nacka Nature Reserve.

Stockholm Central train station is reachable by a combination of a 10-minute walk to the subway and a 15-minute tube ride. It is also possible to reach the central station by bike within 30 minutes.

According to Mathias Edstedt, it is totally silent in the eco village at night. What else could you wish for when living in a city? It is understandable that an area like this is popular.

One of the area neighbours that I run into in the eco village playground reveals that it is currently is very popular to live here. Maybe it is because urbanisation daily feeds Stockholm with 55 new inhabitants.

The latest townhouse sold in the eco village, 158 square meters, changed owners for the price of eleven million Swedish krona (€1,17 million / $ 1,29 million). Mathias Edstedt estimates that about 125 persons live in the village and that there are seldom more than one or two townhouses for sale per year.

The eco village was opened in 1995. A group of driving spirits formed a society in the beginning of the 90’s and joined forces with the Swedish building company HSB and the Swedish designer and builder of family houses, SMÅA. The trinity applied for, and was rewarded with, a building permit for the land.

The society wanted to realise their joint vision of a beautiful, social and ecological form of living in the southern suburbs of Stockholm. A high level of resident influence was also a factor that the society strived for. Most of the society members lived in the suburb of Björkhagen and had architecture or sustainability as special interest. Many of Understenshöjdens initial inhabitants still live in the eco village!

Understenshöjden was originally intended to be an eco village that lived in harmony with the surrounding nature.

Every house was built to fit the geography of its placement and the same was done with the car-free transportation paths within the village.

Every building was built of the same environmentally friendly materials. The wooden facades have not yet needed repainting. Wood, according to Mathias Edstedt, is not maintenance-free. On the northern side of the townhouses the wood-facades still look new while the wood on the sunny side of the buildings is definitely more worn.

The outside of the window frames are also unevenly worn, also depending on what point of the compass they are facing and have in general more often needed repainting.

The walls on the inside of the houses have first been covered with plaster and then painted according to every townhouse owner’s preference with either linseed oil paint, egg tempera or glue paint.

The bathrooms are built in beautiful, red brick. Mathias Edstedt tells me about the fantastic breathing qualities of brick, avoiding damage caused by damp. The bathroom walls, if constituting outside walls, are insulated in several layers of insulating material – brick – light clinker marbles – brick.

The original 1995 heating setup of the eco village consisted of rooftop solar panels on the 44 townhouses combined with heating culverts leading heat to the townhouses from the eco village’s central pellets furnace.

Unfortunately the inhabitants of Understenshöjden had a freezing first winter as the pellets furnace was new, and at that point in time, also an untried technique and turned out to be not strong enough.

To solve the winter heating problem the eco village plugged into the City of Stockholm’s new district heating and also upgraded their pellet furnace. Problem solved!

Since then solar panels and district heating are used in warmer periods of the year and heating from the pellet furnace are added when needed during the winter.

The eco village still has 1995-year’s solar panels in use, however in 2011 a new solar panel system was added onto the

village community building. It became very obvious that solar panel techniques had developed a lot and the new solar panel system was totally maintenance-free, which has decreased work for the eco village inhabitants.

The inhabitants use a lot less energy today compared to 1995.  The incrementally built heating system, with its combined energy sources, is getting old, worn and far from maintenance-free.

The eco village inhabitants considered what kind of system they should change to and had an independent contractor investigate alternatives. The eco village has not yet decided to go ahead with the investigator’s recommendation of boring 22 holes in the hill of the eco village and an investment in a geothermal heating pump.

Mathias Edstedt debates different kind of energy sources, that could be considered the most environmentally friendly and which decision criteria should be taken in consideration:

Sewer and drainage in the eco village

Stockholm, and other densely populated areas in Sweden, have high demands on water purification, so as not to risk polluting the land and the village had to be connected to the city sewerage system. Understenshöjdens eco village was initially granted a unique exception from the rule and allowed to build its own sewer system. The system included a cleaning system by Bioclere connected with a streamlet to several small ponds for the purpose of cleaning the water in several steps before the water was led out into the nature surrounding the eco village.

The village still cares for its surface and stormwater in this way but the residential water outlet had too high levels of nutrients for the dam-system to clean, risking pollution of the land around the village. If there had been more room to add a couple of cleaning dams in the system it could have been possible to manage the cleaning of household sewer water with the eco villages own system, but there was not. Consequently the eco village connected their housing sewer to the Stockholm city central sewerage system.

Cooperation of the residents of Understenshöjden

The eco village housing cooperative at Understenshöjden have had a very strong influence on how the area was built, later developed and run. A collective decision-making has always been the reigning decision model and is always performed in large resident meetings. Mathias Edstedt says that the eco village attracts a lot of idea-borne persons and that strong matters of opinion are often shared at the lively meetings.

The eco village housing cooperative is in many ways just like any other Swedish housing cooperative, being one of the most normal types of housing societies in Sweden. It organises annual meetings, communal cleaning days and owns a communal building containing the communal heating system furnace, washhouse and meeting facilities. The meeting facilities are used for the annual meetings but are also let out to members for individual celebrations or activities such as dance classes.

-I am sure that there is an interest in growing one’s own crops, says Mathias Edstedt, however he believes that a lot of residents handle this urge at their summer houses. Further, he doesn’t believe that urban farming automatically needs to be a function in an eco village. I note that this at least is not the case at Understenshöjden.

The self-management of the eco village

The eco village inhabitants run most of the ground management including maintenance of nature areas, roads, bridges and fences. The eco village also owns a tractor so that members can clean walkways from snow. Mostly the inhabitants also run the electrical and heating systems.

What lesson can be learnt from a 20 year old eco village?

What will the eco village look like in 10-15 years?

Mathias Edstedt believes the eco village will look similar to today as the facades of the townhouses won’t change that much. Most of the technical systems will have been replaced with more modern solutions. He also mentions that the eco village has discussed the possibility of adding houses within their boundaries. Time will tell if the adding of further houses will be possible to realise, however the rapidly growing city of Stockholm does need more living quarters!

Also this week: Do It Yourself, save the planet!

Next week: Tellus Think Tank is taking the seasonal mid-winter holidays off to contemplate on improvements.

We are back again in January, with a serie of articles about an European city that is laying the foundation for a sustainable future. String along and meet Newcastle upon Tyne!

Also, sign up for our newsletter and you will receive an email when the next Tellus Think Tank article is published!