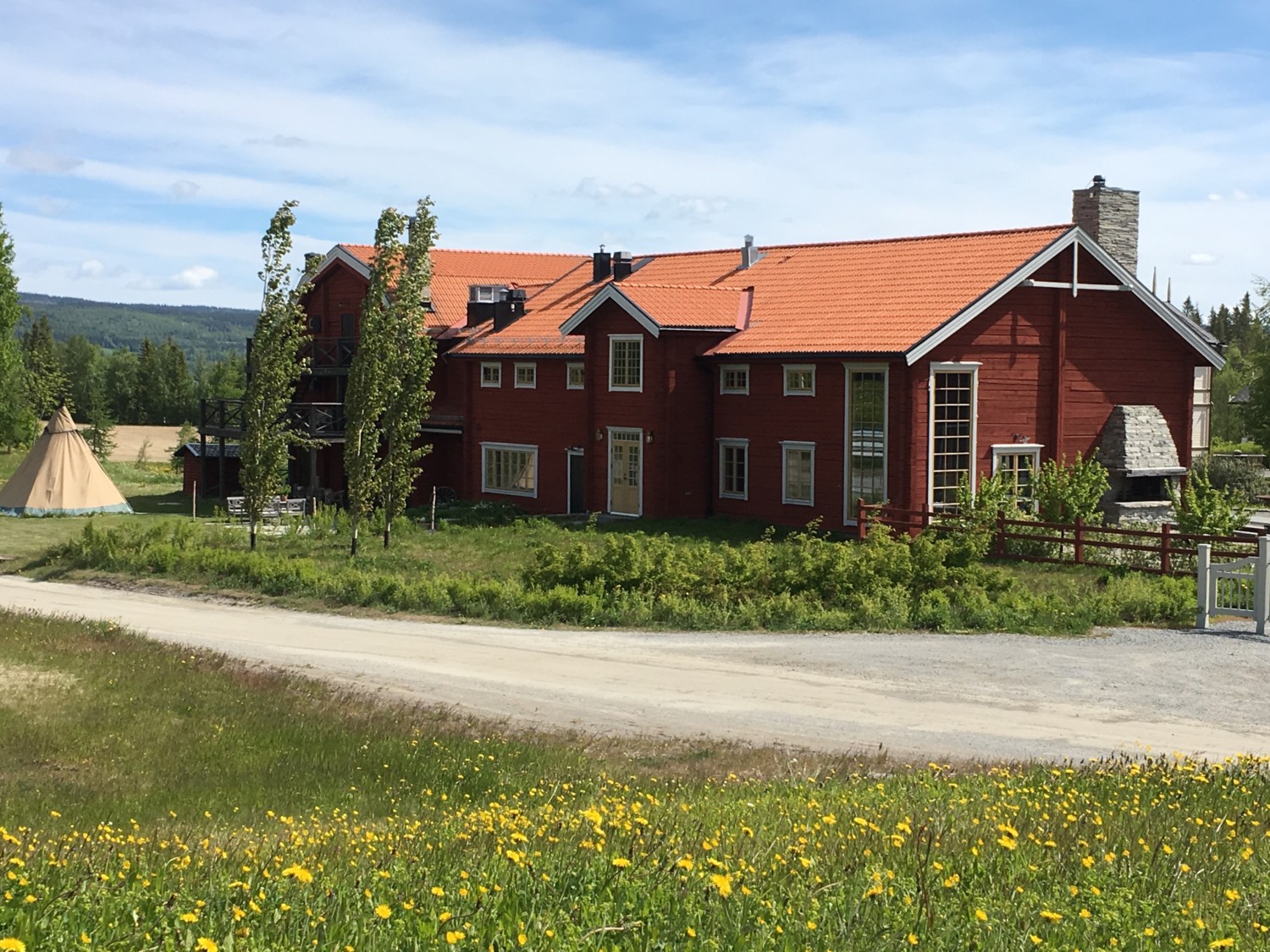 Tellus Think Tank visits rising star restaurant Faviken (Fäviken) in the North of Sweden. We want to learn more about Fäviken’s organic food policy. Their leading principle is to serve locally produced organic food as far as possible. This is not the easiest task so far north on the globe for an establishment aiming to be one of the best fine dining restaurants in the world!
Text: Domi, Tellus Think Tank (c)  Photo: AnnVixen

of mainland Canada. Summer is short. Winter is long and covered by snow. Spring has arrived when we visit in the middle of June. The county of Jämtland is showing off in the sun and displays an array of local flowers and herbs along the 9 mile / 15 kilometer dirt road leading towards Faviken. Fäviken is located in the wild countryside just north of the Swedish alpine town of Åre.

Fäviken and Magnus Nilsson are rising stars in the world of fine dining and foodies. During later years Fäviken and Magnus have also become known to the public through programs such as “Chef’s Table” on Netflix and “Mind of a Chef” on British BBC. On the day of Tellus Think Tank’s visit Fäviken was listed on “The World’s 50 Best Restaurants”.

We meet the restaurant’s reservation manager Girlis Tuisk and

one of the chefs Peeter Pihel for a tour around the restaurant that has been awarded two Guide Michelin stars.

Fäviken’s leading principle is to serve locally produced organic food as far as possible. One way to do this is to preserve as much local produce as possible to be able to have the restaurant open even in February, March and May when fresh vegetables are hard to come by.

Faviken serves dinner for about twenty persons five nights a week. They recently started serving breakfast. Foodies and fine diners fly in from all over the world to stay and dine here. Girlis receives a phone request during our tour and courteously informs the caller:

– I am sorry but we are fully booked up until New Year, she says.

Girlis tells me that when Fäviken opened the table booking for 2016 most of the seats were booked during the first day. Fäviken mania!

The kitchen is manned by Magnus Nilsson and another eight

chefs from Sweden, Estonia, Singapore, Italy/Germany, Mexico and Canada. The kitchen is also supported by five “stagiaires” – I understand that they are voluntary chefs working for food and board to get practical occupational experience at one of the best kitchens in the world.

Fäviken serves locally hunted meat from grouse, elk and deer to mention a few. The restaurant is equipped with its own butchery.

Fäviken also has its own fishpond. Trout is fished by old style fishing whenever needed for the twenty five course meals served. The menu is forever changing and no evening menu will be like the night before.

Gathering of local flowers and herbs

During summer gathering of fresh local produce keeps the stagiaires busy. A big part of their day is spent gathering fresh flowers and

herbs from the wild around the farm. The greens will be served either fresh, dried or in different pickle mixes. One of the tea’s served at Fäviken is made from a mix of locally picked birch and black currant leaves mixed with purple clover. The tea ingredients are picked when ripe, dried, preserved and mixed for serving all year.

In Fävikens kitchen garden we first stumble across the tobacco patch. The tobacco will be made into snuff and served as a zestful feature of the twenty five course meal.

We take a peek into the root cellar behind two heat and cold protecting doors.

During winter the root cellar might only be reached by digging through deep layers of snow. Beautiful vegetables in glass jars cover the shelves inside. (Join TTT for a quick peak of the root cellar here.)

Reading the labels we find pickled cowberry (lingonberry), blackcurrant, cranberry and gooseberry. We also find fermented turnips, carrots and garlic. Baby apples are fermented or conserved in vodka, adding pale colours to the shelves. At least three different kinds of fermented beets give darker and lighter shades of red and pink.

Maybe the biggest surprise to me is to find fermented spruce buds and fiddlehead ferns, it makes me even more curious about the dinners served at Fäviken. According to Peeter, the Fäviken chef’s are experimenting with traditional folk techniques for fermentation and conservation. He particularly mentions a special experiment with added cow fat.

-We’ll see how this conservation turns out next summer, says Peeter smiling.

After asking about the recipes for fermentation and conservation we learn that Fäviken keeps them secret. However there are plenty of recipes on the Internet if you are interested in experimenting for your own glassed vegetable beauty!

Fäviken – a sustainable practice for Europeans to be inspired by

pesticides in the ecosystem of Earth.

The Tellus Think Tank team hopes it will inspire more people to follow and keep their own gardens and ferment and conserve their locally grown produce. The ascent of local produce is especially important in Europe. Europeans are importing over 50% of their food from other continents, which constantly feeds the growing amount of carbon dioxide in our atmosphere.

If sustainable practices such as Fäviken’s, residing this far north, can thrive on locally produced food it shows that more could follow in the same footsteps.

Keep your eyes open as Tellus Think Tank will be visiting an all year self-sufficient farmer in the same growth zone as Fäviken (zone 6-7) – it is possible to grow one’s own food even far up north!
Would you like to be notified when the article is available, click here.